How do you make dumplings? 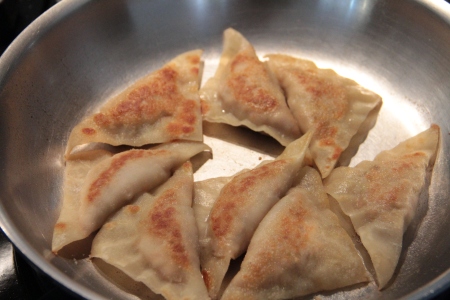 Dumplings can be filled with pretty  much anything.  My recipe for 50 pork dumplings is below.  I make 50 at a time because that’s how many wrappers are in a package, and they freeze and reheat well.  I don’t eat dumplings anymore because I don’t eat grains and am on the Specific Carbohydrate Diet (SCD), but my family still loves them, so I make them.  At the end of this post, I have notes that include how to make burgers out of dumpling filling for my Paleo, SCD, gluten-free, and grain-free followers out there.

It takes me just over an hour just to fill 50 dumpling wrappers, so set aside around 2 hours for initial prep, filling, and clean up.  It will be worth it when you have a freezer full of quick-to-cook dumplings!

You’ll also need a food processor of at least 8 cup capacity (or you can process in batches), large mixing bowl, smaller bowl, 10-12″ diameter frying pan with lid, flipper, and a little bit of water (both important for steaming and for wetting down the wrapper), a finger bowl, and if you’re freezing most of them, a freezer container with lid (the Pyrex 3 cup container is a perfect fit for approximately 12 of them, and the 6 cup is great for 20-24, depending on how full you fill them).

Though you could close up the dumplings by hand or fork, it is much easier and looks better when you use one of these dumpling presses. I got this one for $3 at Bowery Kitchen at Chelsea Market. If you’re not near Chelsea Market, here are some cheap ones at Amazon: $4.99 one, and a set of 3 for $4.99.

This dumpling maker will save you a ton of time and energy. It’s the best $3 I ever spent!

First, process the cabbage, carrots, mushrooms, grated ginger, scallions (and sunchokes, if you added them), just until the mixture is fairly homogenous.

Then, place the processed mixture in a large mixing bowl.  Add the ground pork, flour, eggs, fish sauce and coconut aminos.  Mix it all together with your hands, like you are making meatballs (you’ve made meatballs, right?).  This way, you don’t overwork the pork, as you would if you put the pork in the food processor (plus, you’d need a bigger food processor). 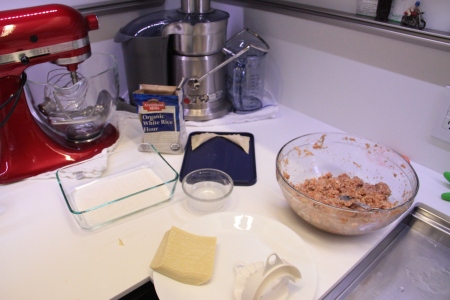 Setting up your workspace properly will make the arduous task of making 50 dumplings go just a bit faster and easier.  Ignore the juicer and the Kitchen Aid.  They just happen to live there.

Next, set up your dumpling-making station.  It will take a while to make 50 dumplings, so only have a little bit of your filling out at a time.  Take about two cups of the mixture out into a small bowl, and put your large bowl with the rest of the filling in the fridge with a cover on it (either a plate or pan lid over the bowl or some plastic wrap or foil).

Place about a tablespoon of the filling in the wrapper and with a wet finger, moisten two consecutive edges with water, fold it over and put it in the dumpling press.  If you don’t have a press, you can squeeze with your fingers, or press down on the edges of the folded dumpling with a fork.

Put the filling in the dumpling wrapper and moisten the edges, so when you fold it over, it will stick together. 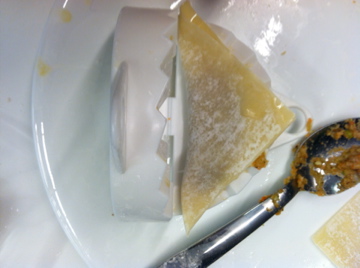 Put the folded dumpling in the press and squeeze down, sealing and crimping the edges. 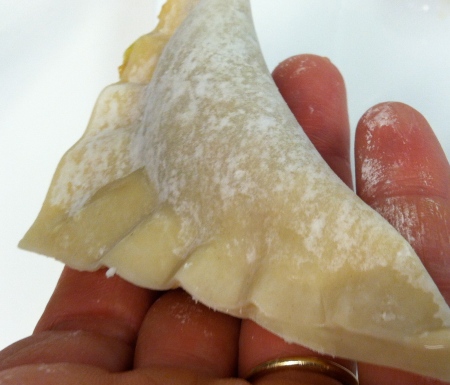 This is how the dumpling looks after it is pressed.

You can boil, steam or pan fry dumplings.  I like them best when they are pan fried with a bit of steaming at the end.  To cook your dumplings my way, heat up a frying pan over medium heat and melt a little less than a tablespoon of butter, ghee, coconut oil, bacon fat or whatever fat you’d like in the pan making sure you coat the whole bottom surface.  Place the dumplings in the pan, ensuring no overlap and turn the heat down to low.  Flip the dumplings, turn the heat back to medium, and let the other side brown (see first picture of this post).  Once both sides are browned, put a tablespoon or so of water in the pan and quickly put the lid on the pan to trap the steam.  This finishes cooking the dumplings as well as softens the consistency of the cooked wrapper a little.  Your dumplings should have an interior temperature of at least 160 degrees F or more.

I’m cooking the dumpling filling burgers on the left and the regular dumplings on the right. 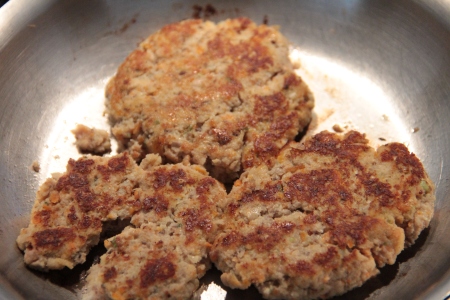 If you want to see how I ate these, my plate will be posted in a few days on Yummy Fixins!

This entry was posted on Wednesday, March 20th, 2013 at 11:09 pm and is filed under Food and Drink, Uncategorized. You can follow any responses to this entry through the RSS 2.0 feed. You can leave a response, or trackback from your own site.

One Response to How do you make dumplings?