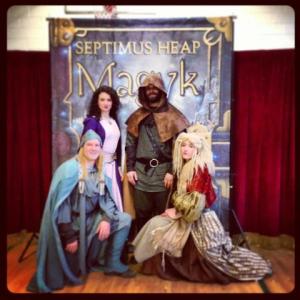 The Story Pirates will be at Books of Wonder this Tuesday to act out the story of Septimus Heap! My middle schooler LOVED this series and got me to read it, and I love it, too.  Do not miss this!  SUPPORT INDEPENDENT BOOKSELLERS!

Free Theatre Storytime at Books of Wonder with Author Angie Sage and The Story Pirates!

Books of Wonder, the oldest and largest independent children’s bookstore in NYC, will hold a free theatre performance and book signing with author Angie Sage on Tuesday, April 30th beginning at 4 PM (18 West 18th Street, between 5th and 6th Aves in Manhattan).

Fyre, the seventh and final book in the Septimus Heap series, was published last week to enthusiastic fan reception. Often compared with Harry Potter and other works of fantasy for middle grade readers, the series follows the adventures of Septimus Heap, who as a seventh son of a seventh son has extraordinary magical powers. An original fantasy about lost and rediscovered identities, magyk and intrigue, and one family’s warmth and strength, the series has appeared on national bestseller lists and garnered worldwide acclaim; Warner Bros. has acquired the rights to make a movie of the first book.

To celebrate the book’s release, local literary-based acting troupe The Story Pirates (www.storypirates.org) will introduce new readers to the series by performing scenes from the first book, Magyk!

Also in attendance will be the series’ author, Angie Sage. Following the performance Ms. Sage will meet with fans and sign copies of all of her books.

The event will begin at 4PM and is open to the public.

This entry was posted on Sunday, April 28th, 2013 at 9:10 pm and is filed under Books, Kid, New York. You can follow any responses to this entry through the RSS 2.0 feed. You can leave a response, or trackback from your own site.