Museum of Math opened in December – should I go?

Here’s the short version – if you are a tourist who is in town now, loves math, and is excited about this museum, get yourself to The Museum of Mathematics.  If you are a local, want to be busy for an hour or two, and love math particularly, I’d give it a few more weeks to get settled, and then go on a weekday (if possible).  If you’re looking for something science-y and not specifically only math-oriented and want to spend a day, visit the New York Hall of Science in Queens instead.

I went to the Museum of Mathematics on Sunday, January 6, 2013 and was generally impressed.  It’s a loving tribute to mathematics, made by people who managed to raise heaping loads of cash.  They scored big on aesthetics and some of the exhibit detail was wonderful.  Many of the exhibits seem to be geared toward children in the 4th through 8th grade range. 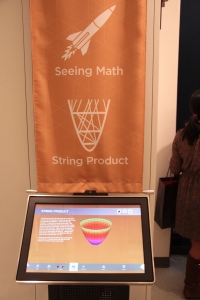 There were many hands-on exhibits, and the Enigma Cafe (a place to sit and work out puzzles on the lower level – there is no food served) seemed especially interesting.  However, even though the museum was probably at half capacity (or less) when I went, this puzzle area as well as many of the exhibits felt crowded.  This is why I advise going on a weekday if you can.

Harmony of the Spheres is a hands-on exhibit that makes music.

The reason I have suggested waiting a few weeks if you are local is because many of the exhibits were out of order when I was there.  The Museum of Mathematics just opened in December, so they’ll probably get it all up and running soon (I hope).

Many exhibits were unavailable or being repaired during our visit.

This entry was posted on Monday, January 14th, 2013 at 11:00 pm and is filed under Kid, Math, New York. You can follow any responses to this entry through the RSS 2.0 feed. You can leave a response, or trackback from your own site.